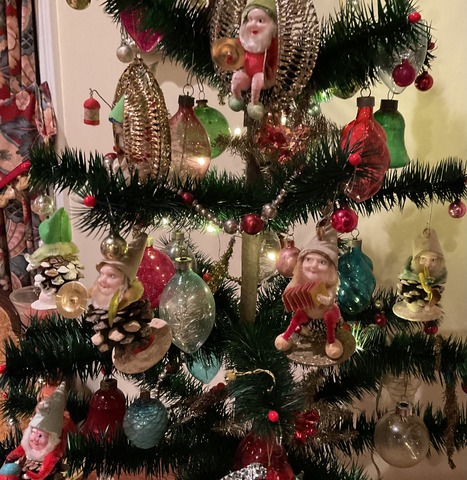 The darling Pinecone Elves I fell in love with years ago.  With their sneaky eyes looking to the side and those grins, you can't help but fall in love.  Many sitting on their pineconeas or swinging.  Most come from Japan and are from the 40's and 50's.

The glass ornaments are clear without any silvering due to the shortage of metal during WWII.  When they realized they were too plain and wouldn't sell, companies began putting a sliver of silver inside each ornament to make them more appealing.  The tree is a new goose feather tree with the same technique used from so long ago.  They were first created in Germany in the 19th century and became popular in the 20th century in the USA.